Well this one appealed to me today – no particular research reason (though I suppose it links, rather vaguely, to my PhD work on regulation of victual sales etc.), just rather interesting to see some details of medieval sneakiness. And maybe having been drinking a glass or two of Law School prosecco (REF results day!) made it jump out as well …

It’s a Kent case from the King’s Bench roll for Michaelmas term 1440, (and see the indictment, here) about dishonest selling of wine. Thomas Elbrygge (also accused of other market-related offences) was indicted for having, on 3rd May, 1439, at Rochester, taken six bottles of old wine of La Rochelle, which was defective in colour and taste and unfit for human consumption, and mixed them with old Spanish wine, and then done various things to try and disguise the appearance, smell and taste of this combination. Egg white comes into the picture, in relation to making the concoction look better, there is also use of ‘gum’ – resin, I think – and pitch – mmmm! – apparently so that it would smell like the fancy Romney and Malmsey wines.  He then sold it as Romney and Malmsey, which was, of course, false and fraudulent, and obviously endangered the king’s people.

I was rather taken by the use of one particular word: along with being a fraud and a falsifier, Thomas was said to be a ‘sophisticator’ of wine. Interesting how words change in meaning over time, and this is a nice example of a real switch in terms of positive or negative implications. We would now generally like the idea of being ‘sophisticated’ – not sure I have ever achieved it, mind you – not so our predecessors. The Sophists of classical philosophy do not get a good press, and medieval people definitely did not want their wine to be sophisticated.

Image: some wine, not, as far as I know, adulterated/ ‘sophisticated’.

Photo by CHUTTERSNAP on Unsplash 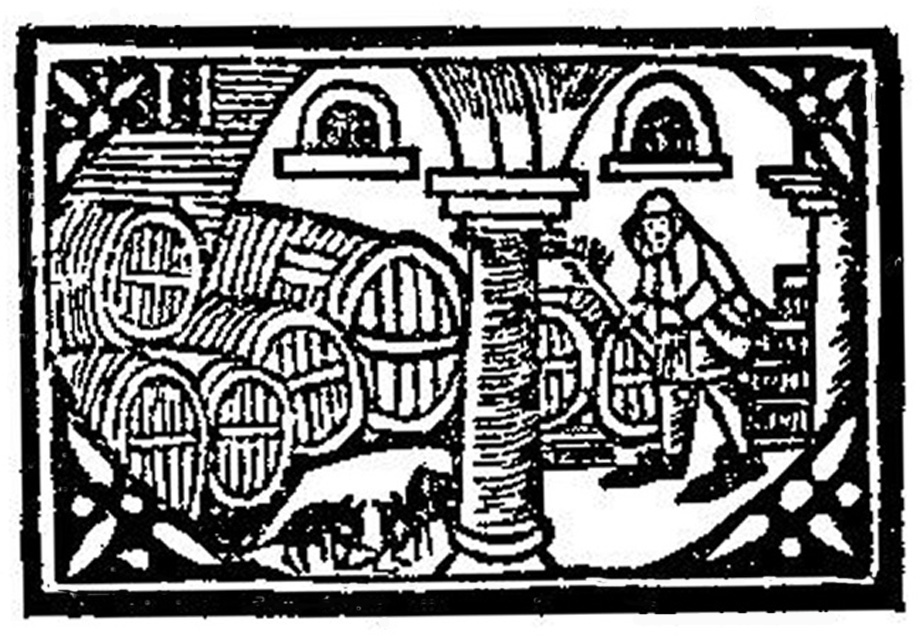 On a King’s Bench roll from Michaelmas 1434, there is an entry telling of accusations made against James Gentill or Gentyll, a broker of London [though perhaps he was a native of Genoa rather than London].[i]

The entry is an ‘error’ case – roughly an appeal in the modern sense – and notes that, in In Trinity 1432, a presentment had been made, accusing Gentyll of offences relating to the illegal export of gold to Bruges, and also with an offence involving the adulteration of wine. The latter accusation was that James and others had conspired to damage the king’s people and inflict a variety of illnesses upon them. Specifically, on 6th October 1431, and various days before and after, in the parish of St Clement Danes outside Temple Bar and elsewhere in Middlesex, they had mixed and brewed up twenty tuns of Rumney wine and twenty tuns of Malmsey wine with other corrupt wines  – Osey and other wines –  and with pitch and resin, producing 100 tuns of corrupt and unhealthy wine. They took some of it this to Westminster and Shoreditch on the 6th October, and on various days afterwards sold it to various lieges of the king, including John Taverner, John Boysse, John Bramsston, Margaret Bosworth, fraudulently affirming it to be good and healthy,  causing those who drank it to be troubled and damaged by various afflictions (diversis perpetuis langoribus), and it was particularly noted that pregnant women drinking it were harmed, their children (pueri – foetuses, presumably) poisoned and rendered putrid (extoxicati & corrupti) and then destroyed, to the great deception and destruction of the king’s people.

As ever, who knows whether the allegation was true, mistaken or vexatious, but, leaving that aside, this has a number of possible points of interest. It illustrates the action taken locally in London, and at the ‘national’ level, against dishonesty in sales, and the sale of dangerous, as well as substandard, food and drink. This took me back to long-ago research for my PhD, during which I learned some good wine vocabulary, and took a few detours away from usury and pricing laws, and into the colourful world of London punishments for the sale of dodgy food and drink (they went in for ‘educational’ and shaming penalties such as having somebody stand with a rotten fish around his neck for selling putrid produce). The suspicion that wine-merchants or wine-sellers would pass off lower quality wine as something with a higher price and reputation, perhaps disguising their misconduct by introducing other substances, in order to mimic the colour of the supposed type of wine, can be seen in London and royal regulations and pronouncements.[ii] There are some references to the fear that this sharp practice could damage health in general. This is the first time, however, that I have seen the specific allegation about damage to pregnant women and the foetuses they were carrying. There is no reason to think that medieval people would have been unable to make a link between the ingestion of contaminated nutrients and foetal damage and death, but this fleeting reference is the first I have seen specifying damage to foetuses through pregnant women’s consumption of adulterated produce as a concern for the common law.  It is one I will ponder in two of my 2021-2 research leave projects: on legal ideas about pregnancy, foetuses and newborns, and on causation of death or bodily harm.